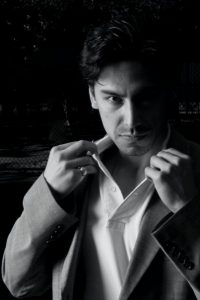 Kekoa is familiar with various mediums, such as oils, watercolors, clay, charcoal and chalk. He has also worked extensively with multimedia design and is an established graphic artist. He is currently expanding his collection of canvas paintings in an effort to host a gallery show.

Born in Northern California, Kekoa developed an interest in drawing at an early age by creating his own superheroes and villains based on his siblings. He also had a knack for drawing characters he saw on television and comic books through memorization, while other children his age needed the aid of trace paper.

Kekoa’s parents and teachers recognized his natural talent when he created a unique design for the annual 100 Days showcase. While other students in first grade glued 100 pennies or cotton balls to construction paper, Kekoa drew an elaborate pirate ship, equipped with 100 pirates performing various tasks.

This intricate piece set in motion a flurry of encouragement from Kekoa’s parents and teachers. With their valuable advice in mind, Kekoa soon entered some of his drawings in the Alameda County Fair Art Show. While still in elementary school, Kekoa competed against many adults and garnered several ribbons for his work. His favorite among his drawings entered was “Merlin The Wizard.”

While still a few years shy of entering high school, Kekoa’s artwork and murals were displayed in a local high school library, where some pieces still hang today. In his junior year of high school, Kekoa was selected by his peers to represent the Class of 1997 by drawing a picture of Bob Marley using chalk. Kekoa’s spot-on resemblance is featured in the 1996 yearbook.

After high school, Kekoa lived a few years in Las Vegas, gaining independence and finding a clear path for his artwork. He then came back to Northern California, where he attended The Academy of Arts College for a year. There, his artwork was featured in several of the college’s art shows. One particular piece was a massive banner that bonded nine individual pieces of digital artwork and photography, and hung from the ceiling on PVC pipes, fishing wire and cables.

Kekoa finished his quest for a Bachelor of Arts degree in Graphic Design at Silicon Valley College. While a student at that campus, he was a board member for the 1st Annual Gallery/Art competition. With degree in hand, Kekoa moved to New York to fill himself on the urban and natural riches of the city, sparking a new energy in his creative mind.

Utilizing his graphic design skills, Kekoa assisted many start-up companies from coast to coast in corporate branding. But still, he was not satisfied with sitting at a desk day in and day out. Kekoa also spent his time in the community, creating art pieces that are displayed as neon billboards in front of New York establishments, and designing graffiti murals on school walls in the Lower East Side of Manhattan.

Kekoa quickly found himself immersed in New York’s culture, craving to become a helpful member of the community. He donated his time to create banners and posters for local exhibits, fashion shows and street events. He has also designed clothing pieces to support several charities, and has collaborated with other well-known pop artists and fashion designers for other charity events.

Although his first love is art, Kekoa has dabbled a bit in writing. He is in the final stages of manga storyboard concepts, which may be released in the future. He is also trying his hand at jewelry making. When not consumed by art, Kekoa spends his time with his church, Abounding Grace, where he is an active member. He continues to reside in New York.

I Has A Newsletter

New Products Available in the Store. Sign up for the Newsletter. Dismiss